Looking Back at Shooting Sci-Fi Miniatures


I stumbled on this retrospective from Alex Funke on his 30 years doing miniature photography for Hollywood films.

"Let’s consider the central issue in using miniatures. It is that the miniature scene must never draw attention to itself. It has to be absolutely of a piece with the photography of the real. And to do this, it must resonate with the audiences’ perception of what ‘the real’ looks like.

"The worst remark that a miniature builder or cameraman can hear is:  '… wow, that was a nice miniature shot …' Oh, the horror! That is failure! That means that the viewer was pulled out of the story by the miniature effect, instead of being drawn into it.

"Utterly damning! Because as soon as the shot is perceived for what it is rather than what it represents, then the audience has been jerked right out of the story and is lost forever.

"What we must do: even though the scene has nothing to compare it to, nothing the viewer has ever seen before, he has to believe that it is consistent with his perception of the world he knows. In fact, our watchword is 'do your work, and then erase your tracks.'"

Read the Whole Article
Posted by Jason R at Thursday, May 16, 2019 No comments:

I ran across this clip from a low-budget made-for-TV movie called "Landslide." IMDB has several entries using that name, so I'm not sure which it came from.

The person who posted the clip seems to have some knowledge of the behind the scenes, he answered a comment asking about the scale used by stating:

"They were larger scale 5th near camera then diminishing as you went further away. The sets were seriously forced perspective, about 20-25 ft deep... If you lifted the camera six inches you see the ludicrous fall away in scale.. The water as always, you can't really scale."

It's true about the water, and that's where the clip suffers. The overall miniature work is fairly well done, but when the levee breaks and the water comes pouring through, the fact that it's a miniature is revealed. 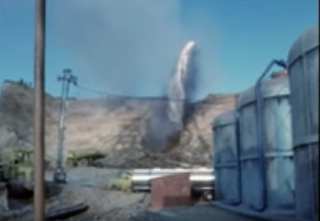 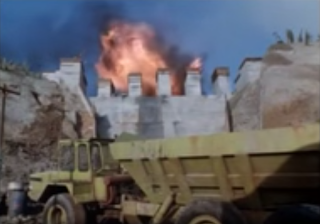 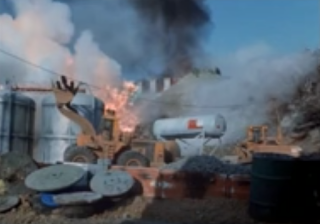 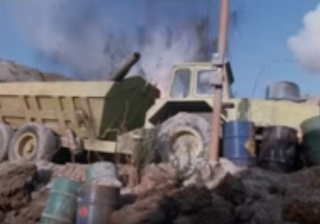 Special Effects Artist Greg Aronowitz has been involved in a wide variety of interesting productions, but here's a nice little environment that was created for the Web series "The Guild."

In an entry on his blog, Greg describes why they went with a miniature over CG, the design process, as well as how the set was built and shot.

Greg describes: "Once everyone was happy with the size and scale of the white model, I bumped it up to a more suitable scale for filming. Movie miniatures are usually not small! Actually, up until ILM did Star Wars, they were often huge. This is so there is no lack of detail when the film is projected 20 feet high. The bigger the model, the more real it will look. I chose to make the Guild Hall 8 feet long, 4 feet wide, and 3 feet tall. Way smaller than it would be in real life, but compact enough that it would fit in my truck if we needed to take it off lot for filming! The final scale actually ended up being ¾ inch equals 1 foot."

"Nick and Bryan spent hours gluing all of the plates around the two-tiered lower wall. They needed to line up perfectly, because remember, what might seem like a ¼ inch difference to the naked eye will look like 3 inches on camera!" 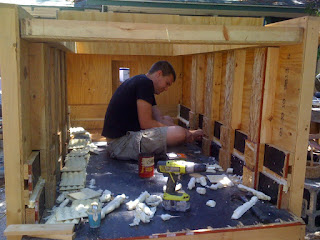 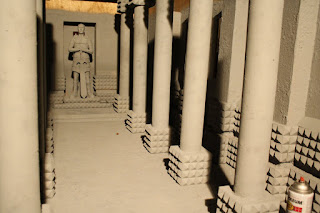 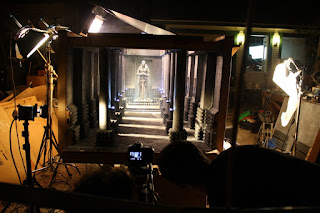 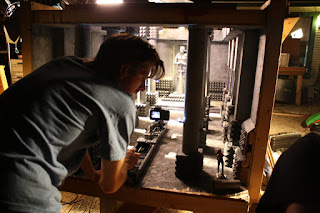 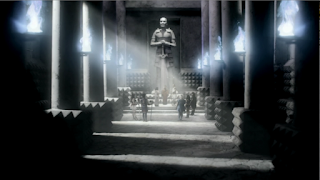 Visit the Making of the Guild Hall

While this short film has been around for awhile, it's a great demonstration of how miniatures can be used to add production value to a low-budget project.

Creator Ryan Nagata describes some of the behind-the-scenes:

"1945A is a presentation I made with George Edelman about an alternate timeline where the Nazis unveil all sorts of futuristic sci-fi technology at the end of WWII, turning the tides in their favor. It's essentially what 5 minutes of the feature film could look like. It was made for a budget of less than $2000. Most of the costumes were made by me for a previous project. We only had five helmets to share between actors, so I had to repaint the different markings between shoot days. Weapons like the Browning .30 caliber machine gun were made from plastic sheeting. I rigged a motor/gear system inside which moved the charging handle/bolt back and forth when the trigger was pulled. All of the tanks and vehicles are done with radio-controlled 1:6 scale models, shot at 48 frames per second. I wanted the project to have a very tangible, non-CGI feel to it. The Nazi "Spider" tank was a custom made puppet."

1:6 scale is, of course, the scale of G.I. Joe and Action Man figures and there are a variety of off-the-shelf items at this scale that could be repurposed for filmmaking, much like the Han Solo figures that were used as stand-ins for Nazi soldiers in the opening of the Ark scene in Raiders of the Lost Ark. 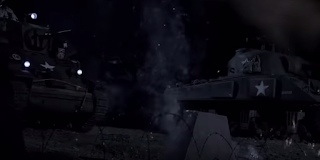 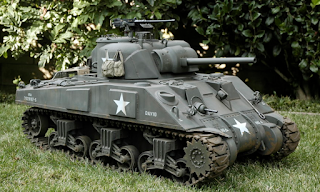 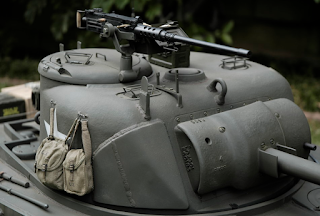 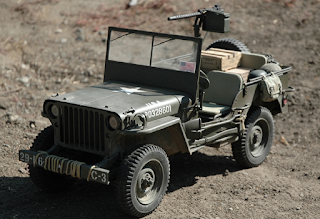 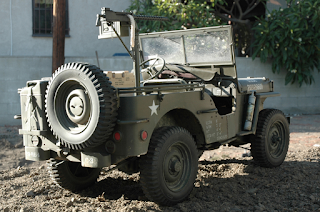 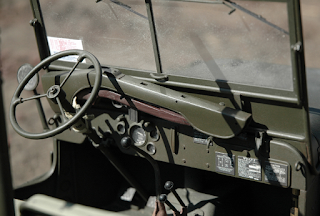 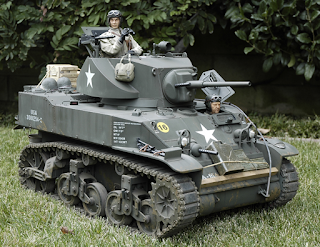 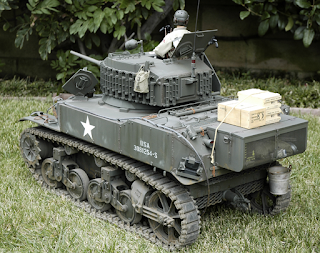 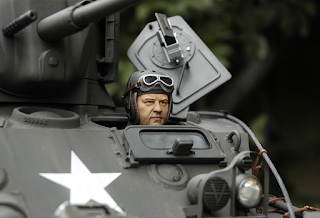