Raiders of the Lost Ark: The Effects

Ah, Google, how I love thee! You've been helping me stumble onto interesting things so faithfully!

In this case,  a search for info about the miniature mine carts in Indiana Jones and the Temple of Doom led me to an article from the November, 1981 issue of American Cinematographer magazine regarding the creation of special effects for Raiders of the Lost Ark. 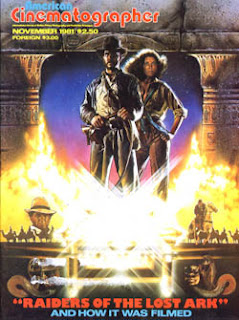 It's a good read! Although much of what is covered will be familiar to a Raiders fan, I was particularly interested in the photo showing a box of action figures dressed in German army uniforms. I had read that they had used off-the-shelf figures for the scene in which the soldiers are swept into the sky following the opening of the Ark, but I don't recall ever seeing a close up photo of these figures. 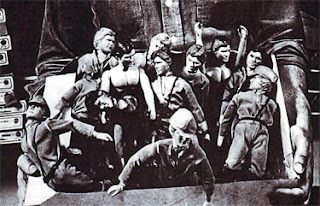 The article itself doesn't discuss these figures (though it does mention some 4.5-inch figures used in the same part of the film), but I had always heard that they had used "G.I. Joe" or "Action Man" figures, while the ones in the box are clearly not from those lines. An additional search pulled up an online prop auction for one of these figures that provided some additional information- they're Kenner's 12-inch Star Wars figures! Han Solo dolls reworked into Nazi soldiers:

"During the climactic ending of Raiders of the Lost Ark, when the interior of the Ark is revealed, the spirits are freed morphing into gruesome demons. During the conflagration the Nazi soldiers are swept up in the flames and destroyed. This is one of the special effects puppets used in that scene and is created, interestingly enough, from a large-scale Harrison Ford “Han Solo” Star Wars action figure! The head, hands, and hair have been repainted, a resin officer’s cap has been added, as well as painted cuffs made from tape. Includes a wooden rifle with shoulder strap (tip of rifle broken). Measures 12 in. tall. Exhibits slight wear from production use."

I love the modification of off-the-shelf items for special effects work. This is a delight!

Below are photos from the auction, as well as a clip from the film showing one of these figures in action. 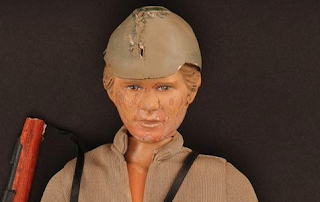 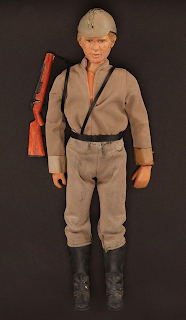