Behind the Scenes - Coronado Reduex...

I finally took the time to get some video captures of the miniatures used in Coronado (mentioned in a previous post). Again, lots of attention to the effects in the film in the special features on the DVD and well worth a viewing. Enjoy!

Set One - The Village

During the film, the protagonists visit the destroyed village of the rebel leader. Reproduced as both a full-size set in the studio (so they could fog it up real nice) and a miniature set as well. The ruins of the village are mostly made of something that looks like foam core- cheap, simple and effective! The minature truck looks like the 1:18 scale truck used on the bridge scenes discussed later. Note the collection of mini-flashlights attached to the model to get the "beams of light through the fog" as seen in the still from the film. Though not specifically shown, I suspect they used the "pull the truck with fishing line" method to get it to move, as was done in the bridge shots with the same model. 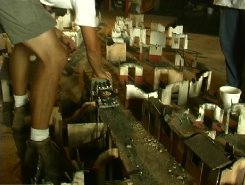 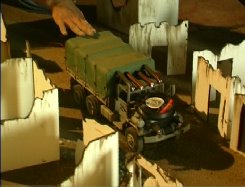 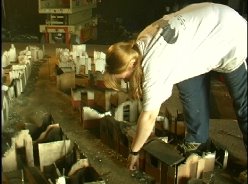 There are several appearances of tanks in the movie, primarily near the finale. The production used two 1:4 scale hero models driven by radio control. The hero models were rigged with explosives for the closeup shots of the tanks blowing up at the end of the film. Although all the photos here are of the larger models, several smaller models were used for a sequence in which the army faces off with the rebels. These tanks, however, were not motorized. 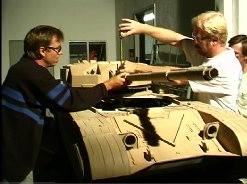 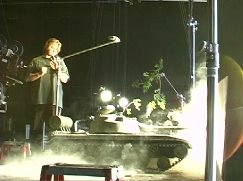 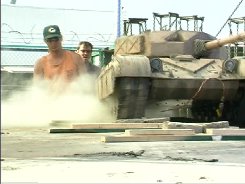 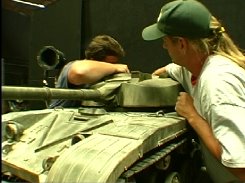 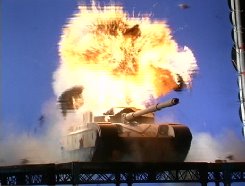 The rebel base is in a cave hidden behind a waterful deep in the jungle. Inside are Mayan-esque pyramids and statues. A miniature set was constructed and populated with people vehicles and aircraft via compositing. The miniature set was never filmed, only photographed using digital cameras. The resulting digital photos were stitched together at used for compositing purposes. When shooting photos for the background plates, two sets were taken- one with the set filled with fog to get light streaming through the windows and one without to create a matching clean plate. 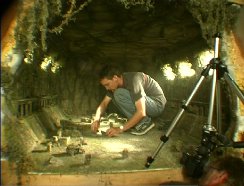 There are two scenes involving crashing jeeps. In the first clip below, a mis-fired bazooka launches the jeep into the air and it tumbles end over end after narrowly missing our heros. In the second, the jeep just misses passing in front of a speeding train. The miniature used in both is a 1:6 scale G.I. Joe jeep with figures. In the first scene, the model jeep was launched using explosives while being filmed against a blue screen. In the second, it was sent flying using a pneumatic ram. In both scenes, the end result is composited with live footage and comes across as very convincing. 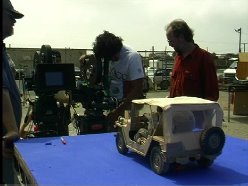 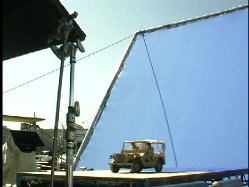 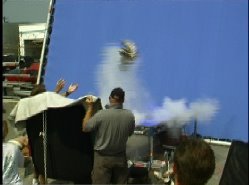 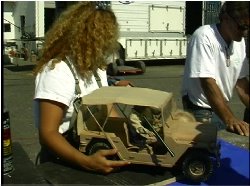 Driving a truck across a rickety bridge over a ravine is challenging in real life, no less so in miniature. Using model trucks and bridges in 1:6 and 1:18 scale, the effects team shot the models against blue screen for compositing. As mentioned previously, the miniature trucks were moved across the bridge by pulling them on a wire or fishing line. For the bridge collapse sequence, pneumatic rams were used to pull the bridge apart in a controlled manner that could be repeated if need be. As you can see, some "miniatures" can be pretty big! 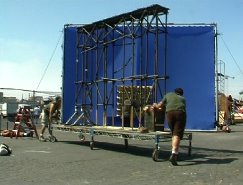 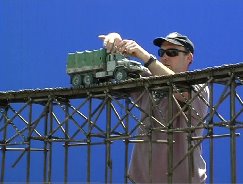 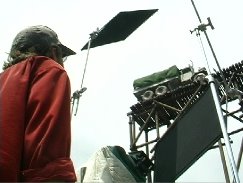 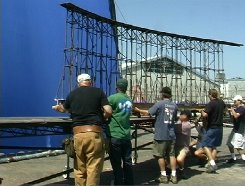 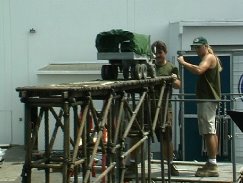 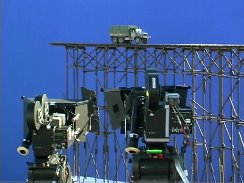 Posted by Christian Film at Friday, January 27, 2006 No comments: